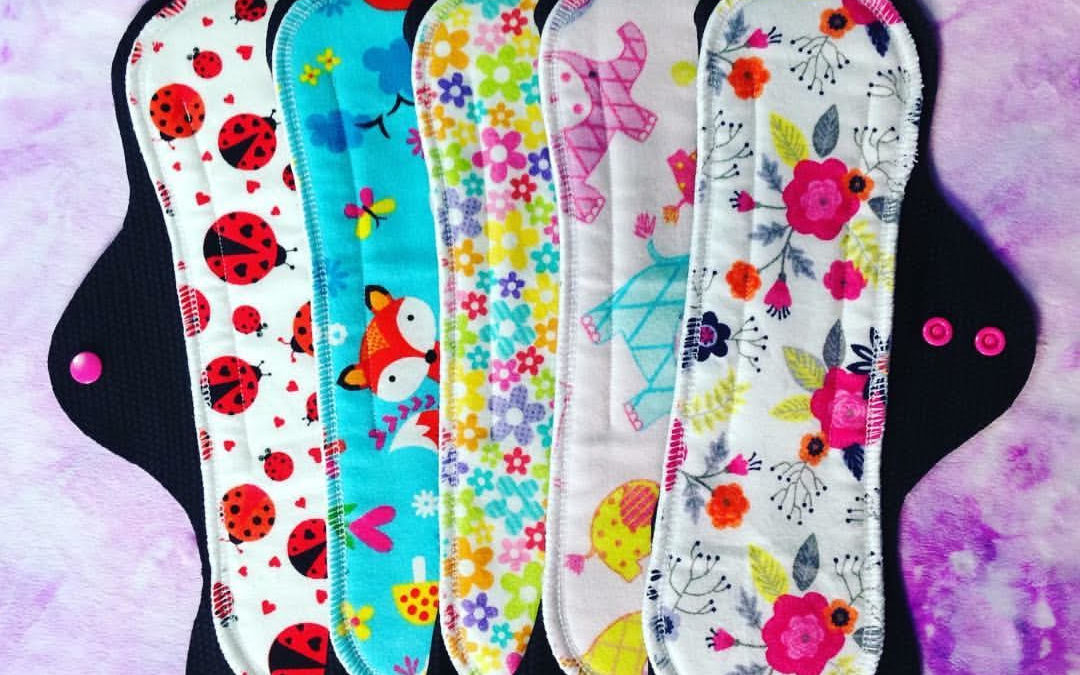 If you suggested that cloth pads were the way to go ten years ago, I would’ve literally gagged in your face. A grown woman, yet still so blissfully immature about the world around me. Tampons were the only option for me, I didn’t give it a second thought.

Fast forward ten years and I am the loudest, proudest cloth pad advocate you’ll ever meet. Seriously. I bumped into an acquaintance in Woolworths the other day, and somehow managed to turn the conversation into ‘cloth pads are life.’ Preaching so hard that she and her daughter NEED them in their lives, that I almost broke a sweat! Which is ultimately what led me to write this blog. I wholeheartedly believe every woman deserves this burst of information in their lives. So buckle in ladies and gents, things are about to get bloody awesome. How good are period puns?

I was introduced to the world of cloth pads by my sister. Over the years she’s worked hard at reducing her plastic use and wastage, and for the most part, I was impressed. When she told me that she’d switched to cloth pads though, I thought she was actually crazy. The thought of washing out your own blood from pads really disturbed me and was beyond my comprehension.

Little did I know, they were exactly what I needed. My periods were extremely heavy, painful and I eventually learnt I have PCOS, along with other issues. I would leak through every pad and tampon, and I was spending a small fortune on sanitary items.

After the birth of my youngest child, I had a lot of discomfort. I struggled to use a tampon and was forced to only wear pads. I think most women can relate to the fear of wearing pads out and about. From the crinkling sound when you walk, to the irrational fear of ‘smelling’ that drives you to a point of paranoia where you lean down to sniff every so often, and of course the discomfort and fear of it being noticed through your clothes. If I had a dollar for every time I’ve asked my friends and family if they can tell I’m wearing a pad, I’d be a millionaire.

Eventually I had enough of the soaking and leaking and crying. I figured if I was already spending so much time covered in blood and attempting to clean up the aftermath, I had nothing to lose. I ordered my first set of cloth pads.

They actually sat in my cupboard for several periods before I decided to give them a go. Actually, truth be told I had a surprise period and no pads at home. But from the second I put them on, I was in love.

Seriously… it feels like heaven. For those moments that feel like your uterus is falling out, it’s like a little hug just keeping it in place. Like a vaginas best friend, telling it everything will be alright. I feel so comfortable all the time and I never stress about leakage anymore. I am in amazement every single period at how darn absorbent these things are! Not to mention the amount of money I’ve saved!

Since switching to these amazing vagina cloud puffs, my period is SO much lighter. It’s much shorter and a lot more comfortable in general, a welcome relief when suffering with PCOS. But the perks do not stop there.

Aside from being extremely bad for the environment, there’s also huge health concerns around the regular and long term use of these items for women. Especially those already suffering with conditions such as PCOS, endometriosis, and irregular/painful periods.

The FDA doesn’t regulate the ingredients used in feminine hygiene products, and since sanitary items are classed as a “medical device” the ingredients don’t have to be listed on the label or disclosed by the company. While many brands of tampons do list some of the ingredients, full disclosure isn’t mandatory.

The vagina is extremely absorbent. Studies have shown that chemicals like oestrogen, will be absorbed vaginally between 10-80 times the rate that the same dose would be absorbed orally. It’s not hard to fathom that chlorine and pesticides used in the cotton to make these products will be easily absorbed too.

Women’s Voices For the Earth have found that a wide variety of chemicals and pesticides contaminate the cotton used in popular brands of tampons — including procymidon and piperonyl butoxide, which the EPA has determined to be a “probable human carcinogen.” But shockingly, there has so far been no significant scientific research into what risks women might be exposing ourselves to when we expose our vaginal tissue to these chemicals.

Here’s what we do know:

The fiber in the absorbent pads that you use has been linked to cervical cancer.

The dioxin present in the menstrual pads has been linked to ovarian cancer.

Pads contain odour neutralisers or deodorants that contain contaminants that have been linked to hormone disruptions, infertility, birth defects, dryness, and cancer.

For pads and tampons to get that white crisp look, they are usually bleached which can create toxic dioxin. Studies have shown dioxin collects in your fatty tissues and according to an EPA draft report, dioxin is a serious public health threat and has no “safe” level of exposure.

Published reports show that even trace amounts of dioxin may be linked to:

Abnormal tissue growth in the abdomen and reproductive organs

Abnormal cell growth throughout the body

I don’t think it’s a coincidence that my periods have become much more manageable since making the change.. With so many options now, including cups and period underwear, it’s crazy not to make the change!

If cleaning them is a concern, I can assure you it’s so easy. I only ever have to change my pads 1-2 times a day now and I usually time it with a shower, rinse them while I’m in and throw it straight in the washing machine. If you can clean your sheets, you can clean a cloth pad. I urge you all to simply give it a go. I promise you’ll not regret it.

There is one company I swear by, so I reached out to them and they’ve been kind enough to provide a generous 10% discount for any Mama Quaintrelle beauties who want to give them a try.

Pro Pad Tip: My absolute favourite pads of theirs are the minky tops! I find them to be most comfortable and absorbent and love their designs.

With a beautiful range for mums and also cloth nappies for Bub you won’t be disappointed. This is not a paid or sponsored post, just a genuine hook up for our home girls. So if you haven’t already made the switch, now is your chance.

Send Me My FREE Guide