The third story in our series comes from Ange, who experienced a lovely waterbirth with her son Benji.

I approached childbirth with a very open and positive attitude, with no real plan other than to just go with what felt right, and also of course what was medically advised. This was really influenced by my older sister, who only 5 months earlier had given birth to her second daughter. She taught me to trust in my body, focus on breathing techniques and visualisation. Visualising meeting my baby (and discovering whether it was a boy or a girl!) was really what kept me going throughout my entire labour.

In the lead up to Benji’s birth, I spent time familiarising myself with calm birth mantras and focussing on the fact that this is what my body was made to do. I developed trust in my body and spent little time deliberating on any fears or anxieties. My ultimate desire was to have a water birth, with my husband – Jeff – being the one to deliver our baby, delayed cord clamping and a physiological third stage. I hoped to avoid having an epidural, however I allowed myself to accept that when the time came I might change my mind on this!

We arrived at the hospital at 6:30pm on a Sunday evening, after spending the day labouring at home in a very relaxed and almost blasé way. Jeff and I even finished watching the Panthers v. Tigers game before getting in the car to leave! I’d had my first ‘real’ contraction at about 9am that morning, while walking up a hill nearby to my house – something I’d done two or three times a day over the past week! I was 3 days overdue and well and truly ready to meet our little love. Upon arriving I was met by my amazing student midwife, Nicole, and I burst into tears with elation at the idea that this was finally happening. I was assessed and found to be 3cm dilated – a lot less than what I’d thought. Nonetheless, I settled into the birthing suite and a routine of dancing, hip wriggling and breathing my way through each contraction.

Jeff surprised me with his ability to know exactly what I needed well before I knew it myself. He supported me in so many ways, guiding my movements to help me to relax and work our baby down. I started using the gas to ease the pain of my contractions, which also acted as a distraction technique.

After around 5 hours, I was starting to tire and asked to be assessed again. My heart sunk as I found I was 4cm dilated. I had only progressed one centimetre since arriving at the hospital. Up until this point, I had spent the majority of the time on my feet, as I found when I allowed myself to relax the contractions slowed – which was not something I wanted. Upon hearing that I was probably in for the long haul, I decided to rest and have a lie down. I continued to use the gas and I think I also had some paracetamol – I’m a little foggy on that detail though!

Only around an hour later I felt a pop and a gush of water – which immediately made me alert and exclaim “I think my waters just broke!”. Sure enough, things were really starting to pick up, and my contractions started to come faster and stronger. It was at this point that I started to mutter about the possibility of an epidural. The pain was a lot stronger than what I could have imagined. Nicole and Jeff both had my best interests at heart however, and reminded me of my hope for a water birth. With this in mind I moved into the shower and found the heat on my back and stomach really helped to relax me. I also started using my voice a lot more – I’m sure I would have been heard in the corridors!

Nicole had beautifully decorated the bathroom for me – with battery operated fairy lights and candles scattered around the room, and Jeff had put on some of my favourite music. The bath was filled and I opted to move on in – with Jeff joining me in the hope that our little one wasn’t too far away. The pain at this point was phenomenal, I continued to focus on my breathing and using my voice, despite Nicole reminding me that I should try and save it for talking to my baby! I started to lose focus a little and began suggesting an epidural again. Nicole suggested I have a feel to see if my baby was close, and sure enough, I found that he wasn’t far away at all! This feeling, along with not knowing yet whether we had a boy or a girl, gave me the drive and determination to keep persevering. I knew if I wanted an epidural I would have to get out of the bath, and there was no way I wanted to do that! I continued to breathe my baby down, not really pushing at all, just letting the contractions do their work.

Not long after, our little one’s head emerged – being in a sitting position allowed me to see this, and it truly was the most amazing experience. Jeff was not allowed to touch Benji until he had fully emerged, but Benji had other ideas! Jeff’s hand was on my leg, and as Benji’s arm emerged he grabbed a hold of Jeff’s thumb with his tiny little hand. I only gave one true push – and it was at the last moment as I just couldn’t wait any longer. Jeff was the one to pull Benji above the water to allow him his first breath, and he and Nicole placed him safely in my arms. He was calm, beautiful – and big! At 4.1kg I felt very proud to have avoided an epidural.

We stayed in the bath with Benji on my chest until the cord stopped pulsing, when Jeff was allowed to cut it. I then moved to the bed for the physiological third stage, which I was also able to do. Despite having a pretty severe tongue tie, Benji was able to latch straight away and fed easily.

I felt incredibly blessed to have undergone such an amazing birthing experience. I feel as though my open approach to childbirth, along with my focus on my body and what I was feeling, truly allowed this to be possible. However I know that none of it would have been possible without Jeff and Nicole there to constantly encourage me, remind me of where my focus needed to be and to create an environment which was the most perfect space to bring our child into the world. Benji is now nearly six months old and is a beautiful, happy baby. 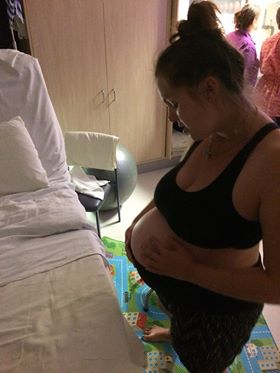 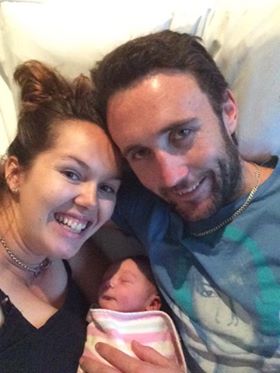 When I say positive – I mean any birth experience where you felt empowered and supported in your choices.

Your story will be shared in your words, with only spelling and grammatical edits.